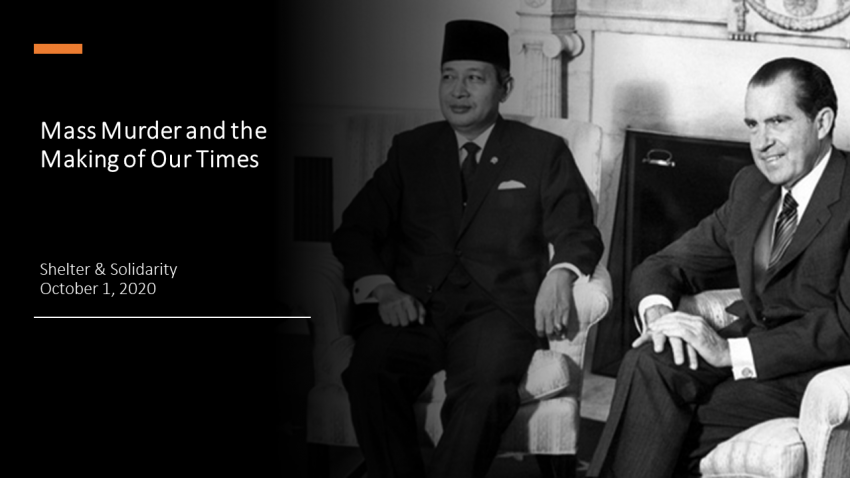 October 1 marks the fifty-fifth anniversary of the beginning of one of the worst episodes of mass murder in the twentieth century: the massacre of hundreds of thousands of Indonesians in 1965-1966. Organized and directed by Indonesia’s military, the killings targeted people associated with the country’s communist party, the world’s largest outside of China and the Soviet Union. The dismembering of a large part of Indonesia’s political spectrum reshaped politics not only in Indonesia but around the world, foreclosing on a political pathway that might have produced greater justice and more equitable outcomes in the Global South. Despite the enormity of these events, and the sordid U.S. role of support, the killings in Indonesia are little-known in the United States and beyond. And within Indonesia, a country in which the outsized power of the military endures, there has been no accountability for the slaughter. This show will explore what took place in Indonesia in the mid-1960s, and its significance for the sprawling country and the larger world; the enforced silence surrounding these events in much of Indonesian society since that time; and their present-day manifestations and efforts aimed at accountability. In doing so, the show brings together three guests:  Vincent Bevins, John Roosa, and  Krithika Varagur, hosted by Joseph Nevins.

Books by Our Host and Guests

Selections from the Zoom Chat

Audience: When I toured the GDR in 1983 with a multi-party delegation, there were two Indonesian comrades, both teaching economics in Moscow. Are there countries other than the Netherlands that host other survivors of the massacre?

Response: Long story about the exiles. Thousands of students and party activists and other nationalists were stranded in the Soviet Bloc and China after Oct 1. The PKI in China called all of them to come to China in 1966-67 and some did. But then China normalized relations with Indonesia in the early 1980s and the exiles were no longer welcome and many moved to W. Europe as refugees.

Audience: This is also the era of the Sino-Soviet split. Apparently PKI exiles were unable to get together to organize a party organization in exile.

Response: Yes, and the Sino-Soviet split affected how the international left interpreted the defeat of the PKI. The Soviet side blamed the PKI for being too radical, too Maoist. While the Maoists blamed the ‘modern revisionists’ in the PKI for not preparing the PKI to defend itself. In the process, the humanitarian side of the story was lost. A lot of the postmortem analyses by the international communist parties were really dogmatic and formulaic.

All shows begin at 7:00 p.m. (Eastern) unless otherwise stated. To participate via Zoom, please register here. Or, watch on Facebook, please visit our page there.